A little older but super random :

That's awesome I wonder if they started the third album with Danja and ditched him for JRoc then? Would love to hear some of it, I love JRoc but Danja is on another level! I wonder if that Tove Lo one is a sample its so strange.

Also need to hear these Beyonce tracks from the self titled album. 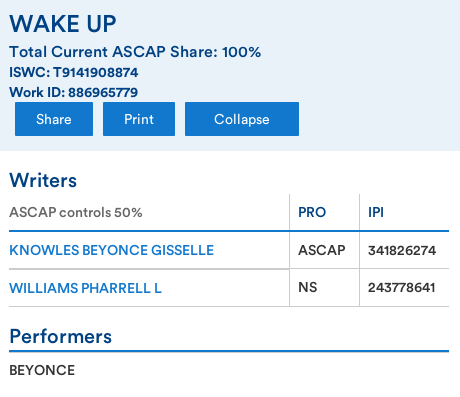 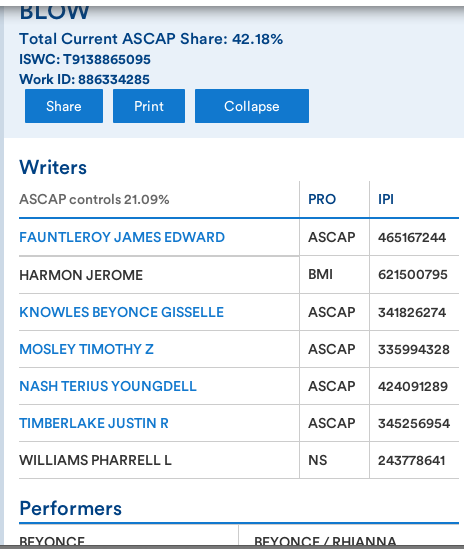 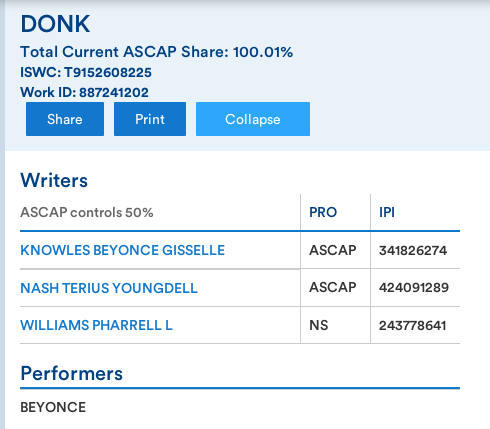 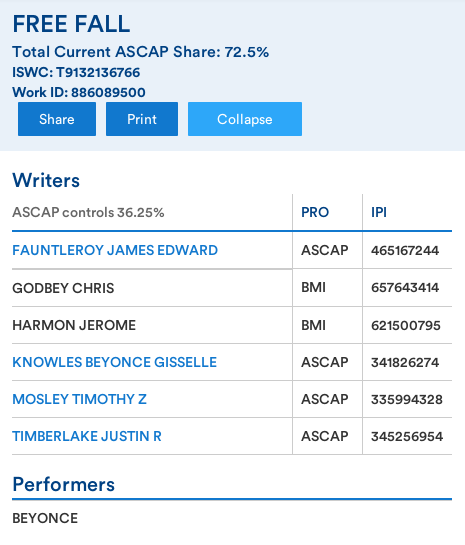 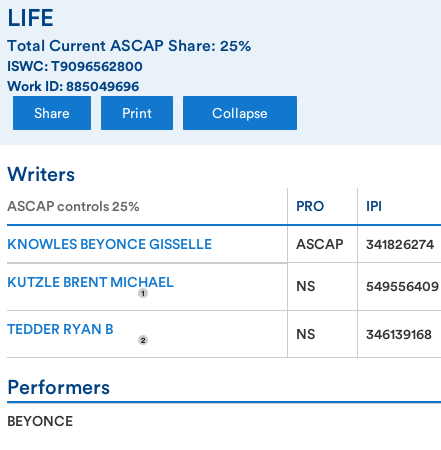 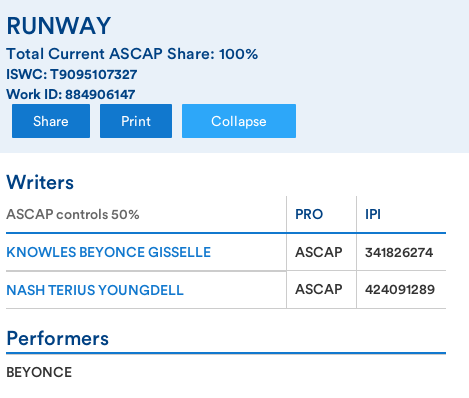 Tim & Danja weren't working together for a while before 20/20 came out. This song was registed like a few weeks ago max.

Runway and Life were some of the first tracks to be registered after 4, IIRC very shortly after so they might've been for that. I've always assumed Donk is The-Dream / Pharrell's part of Blow with the Justin / James / Timbaland & J-Roc part of it originally called Cherry. Free Fall was probably the first track registered roughly around the time the album came out. It might be part of Rocket but I'm not too sure. Honestly I still can't listen to Beyoncé tracks, let alone albums all the way through, I just cringe and cringe...

Runway may have evolved into either Countdown or even an old version of Rihanna's Phresh Off The Runway [it really was registered WAY before Beyoncé came out].

wow well that would be even better news if they were back together then!

Ahh yeah that would make sense as Cherry is registered separately too along with Rocket under different titles. I thought it was weird to have all those big writers on one track and she did combine Yonce and Partition credits like a moron so makes sense.

Yeah that makes sense for Runway since I can't imagine Guetta's being the original with the Dream. Wonder if that Blow registry is a Rihanna collabo or it was hers first?

Haha I detest her as a person and performer but she has a good voice and gets the best writers/producers so I'm happy to listen to THEIR work.

The Madonna tracks must've been some of the last Tim / Danja tracks we got. Keri's debut came out later but the tracks they had together on that were a few years old at that point. That's about 8-9 years ago [!]. And the 20/20 Experience came out in 2013. So yeah, seems unlikely that Filthy is an old track. Sounds a lot more exciting than Max Martin or err Florida Georgia Line.

Don't get me wrong, Max Martin [and his camp more specifically] have gotten a lot more interesting in recent years and Can't Get The Feeling is a decent enough song but it's hardly the direction I'd like to see him go in.

Like half of the tracks off Beyoncé seemed to be mash-ups / reworks etc. A lot of them are obvious split tracks but I assume Drunk In Love for instance was heavily reworked, and looking at the producers for the tracks there are probably more like that.

Well The-Dream would've reworked it with Guetta. But I really don't know either song [Countdown or Phresh Off The Runway] well enough to make a proper judgment.

The way it's written down makes it seem like a collabo that never happened but who knows. They were obviously working with a lot of the same people around that time. I just realized we've never had any indication that Rihanna worked with Pharrell. Maybe they're not super compatible but it would seem obvious. Seems to me like Pharrell will work with pretty much anyone.

It's her voice I hate mostly, all that roaring and grunting, WTF? With every album she sounds more and more like a goat being gang raped by a herd of brazilians.

Ugh I detest that song I 9.9/10 I love anything Max Martin does. That new Taylor Swift song has made up for it though, its SO good! And I'm loving his roster of producers/writers he's building up they all add something different when he uses them, the Katy and Ariana albums were so well done I hope we get more album projects from him.

Definitely, I'm guessing Lyrica did the original demos with Timbaland when she was signed [although Beyonce removed her name] and then The Order reproduced it again with Timbaland/Jroc.

I would love that Pharrell can literally work with anyone he's so multi skilled. I would love to hear them on the same track but Beyonce is probably against it, you can tell she hates Rihanna's success. Being on her husband's label etc she NEVER talks about her or even addresses her and their pictures are always awkward AF

She used to have a gorgeous voice, she always used her lower register more like on 'Confessions'. Like Alicia Keys and Jessie J unfortunately people bought their singles where they started screaming outside of their range thinking they were Christina Aguilera. I'm just glad they still do album tracks where they don't scream as much and that they get the best material or it would be unbearable.

I still hate Katy Perry with a passion, no amount of Purity Ring tracks can change that [I only really like Mind Maze anyway, Bigger Than Me is alright, Miss You More boring as fuck].

Well there's Tove Lo of course. Considering she just dropped a new single [or buzz single maybe] I'm guessing Lady Wood Phase II isn't too far away. I'm not sure if that Tim track is for here, can't picture that being on her album but who knows. All her previous collaborations have been a lot closer to home, I think her last album was even all Wolf Cousins.

Yeah I think most of The Order's [couldn't remember their name] songs on there were like that. Weren't they on the released version of Standing On The Sun?

Even though I hate singers doing tons of those runs I love Jessie J, love the combination of smooth and raspy of her voice and she can definitely sing her ass off. And I love how she's relatively contained on her album tracks compared to Beyoncé who always sounds like she's giving birth on stage, even on her albums. Jessie's singles are so horrible though, I really don't get how the hell they decide on them. I used to be a big Alicia Keys fan, was one of my earlier concerts I went to etc but every album after her 2nd has just been sort of lame overall, with only a few interesting songs and some truly horrific ones. In Common was amazing, like Sade on a very organic StarGate & BloodPop track...but there was nothing like it on the album and it got degraded to being a bonus track.

Haha I know I hate that I like both of them but Max Martin has that power, he's a genius. Tove has hardly done anything with Max Martin I'm really disappointed although her material is really good anyway.

I don't think she's contained at all haha My favourite tracks are the ones where she uses her lower register, the Sia tracks and Brandy duet on Alive and that Sevyn Streeter one from the last album.

I like Alicia's projects overall just not the singles, Girl On Fire album is actually my third favourite after her first two. But yeah that last one was fucking terrible especially promising us quality with In Common. Mark Batson is one of my favourite producers as well but it was her writing that fcked it up, the song concepts were so boring. She needs to get her makeup back on and start using co writers again before she gets stale.

Yeah it's actually just Love Me Like You Do that I can think of that she did with him. He definitely wasn't on either album. I love Tove Lo, wish she had more high profile collabos. Not so much on her own material [albums], but on tracks for other people or odd collabos.

Her vocals are very Disney-style theatrical and full of runs and stuff but as far as roaring goes her album vocals [or live ones for that matter] are nothing compared to Beyoncé. I hate Flashlight, exactly that twirly Disney-esque singing I just mentioned...but I assume you meant the StarGate ones. Those were excellent, some of their better tracks together. Would love to get my grubby mits on some demos, the few we did get were all LQ / super rough. I'd love to hear demos for the Nikki and Jessie tracks.

Girl On Fire [the track] alone is enough to not make me like that album. Hearing that track always hurts me to the depths of my soul *shudder*

That's what I mean though that was the only screaming one on the album. The rest of it was dark and gorgeous, the Maxwell duet was epic