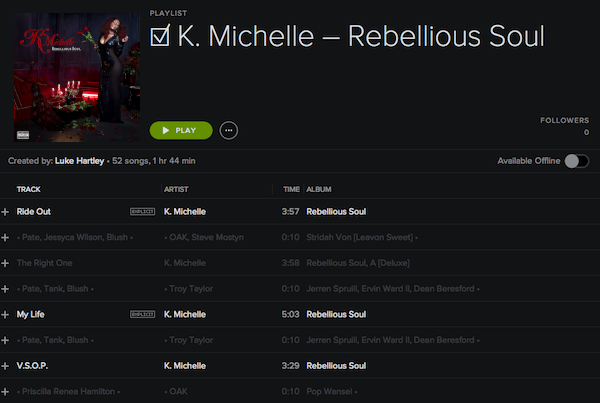 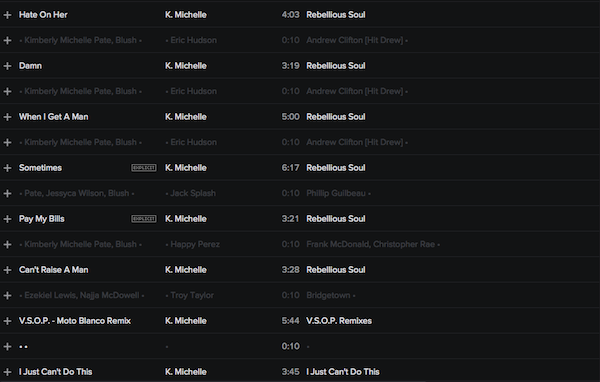 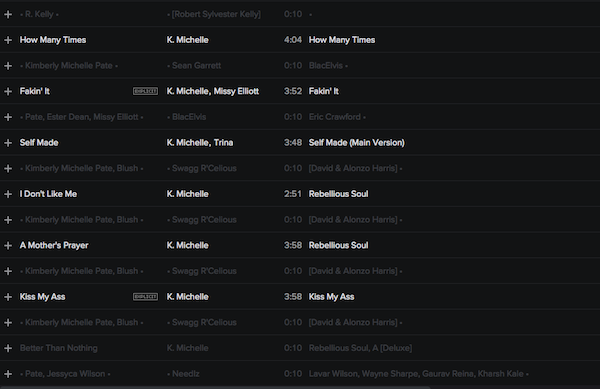 I don't know too much about her unreleased stuff etc but I think Bring On The Rain is Claude / Chuck Harmony, not sure if they worked on multiple albums though.

Hope the Soulshock & Karlin track[s] make[s] the cut or leak[s] or something, that clip sounded pretty good. Like Starrah maybe? Could be Priscilla though I guess

Yeah it was hard with this album as loads of stuff was leaking from her original 'Pain Medicine' album and she even used some on here. I will check it out though, I ove those two with any diva voices.

What clip? Yeah I love them with soulful girls too

Its impossible to tell with them did you hear the Iggy track written by both of them? Priscilla sounds just like Starrah on it.

I love how refined K Michelle made her sound and continues to do. So glad that first ghetto album didn't get released although I loved R Kelly with her [he shines on female tracks] The art direction for her last two albums has also been gorgeous. Reminds me of Keyshia Cole with Ron Fair, when she's with him and his strings her music goes from ghetto to soul queen, he's amazing.

I think Bring On The Rain isn't super old though so I was thinking maybe it was for a more recent album. I think Cri$tyle wrote quite a few tracks for her in the beginning but at some point it got hard to judge because a lot of her earlier tracks have that boomy sound to it.

Yeah K Michelle posted a tiny little clip of the track playing in the studio, like under 10 seconds long, low quality but it sounds pretty decent as far as I can tell.

No I didn't even know Priscilla & Starrah did a song together, can't say I listen to Iggy Azalea.

Yeah they could all be new apart from the obvious ghetto stuff on her old label. Would love to hear the Crystal stuff to as she's great with diva vocals also

Check it out its called Boom Boom its from her cancelled album Priscilla is all over it, produced by ZEDD.

Yeah same with Keyshia although if they haven't got money behind them they sound ghetto AF. I'm so annoyed at Keyshia for ditching Ron Fair he adds magic to all her tracks, he literally put strings on every track on the Different Me album and its my favourite, it makes it sound so expensive!

Are there any other decent collabos on that canceled album? Was that the thing that leaked a while ago?

When did she ditch him? Was that already going on on the album that had the Ester/StarGate track? Well it IS expensive, I reckon strings must be among the more expensive instruments to have played live...

No nothing exciting confirmed, an unnamed track with Nicola Roberts/Jess Glynne/Invisible Men I'd love to hear and also another two with BeBe/Lauren Christy/Gladius [who did the original demo to her single TEAM], one which Bebe has re-registered called 3 Day Weekend which I'm guessing she's taking back for herself. Iggy has apparently re-signed with RocNation now which I hope is true as her last label were shit and the only way is up for her. [even with RN yes]

Yeah definitely but I thought they could do it all with synths now and make it sound super real [although I doubt Ron uses that much new technology for his strings] There are never any cellists or anything so either he plays strings himself or whatever it always just says strings arranged by Ron Fair and every track he does with strings is always epic.

She ditched him the album before that: 'WOman To Woman' [although the lead single 'Enough Of No Love' definitely sounds like Ron's strings so could have been recorded just before anything else] I guess its because she was dissing her label all the time Interscope/Geffen/A&M.

The last album his strings were on was 'Calling All Hearts' but hardly any compared to the whole album of 'Different Me'. You can hear him on 'I Ain't Thru', 'Long Way Down', 'What U Do To Me' and 'Sometimes' and a couple others less so. I think he's the reason the PCD and Girlicious albums sounded so tight too. [See" Vanessa Carltons debut and Christinas Get Mine Get Yours too]

Lol I had no idea she was with RN at any point.

Well yeah you can get very real sounding strings and piano sounds these days but there were definitely real string setions on Keyshia Cole and PCD. I don't know about every song but there's no doubt in my mind that Falling Out for instance has real strings on it.

Well Ron Fair is like deeply rooted in Geffen isn't he? She didn't actually get another deal, she just stopped working with him so much? I'm guessing it's just a matter of her not being ridiculously successful, the budget becomes smaller and the expensive strings are the first to go. Ron Fair's strength is his post-production though, adding strings and making the album a whole. Basically he does the icing on the cake and probably isn't that great at actually composing tracks from scratch. I know there have been thacks he wrote in the past but the only songs he actually produced [mainly] himself have been boring cover tracks the past years.

Oh yeah definitely his strength is in the finishing touches those songs probably all had strings already but you can hear the difference when he finishes them they sound so lush and expensive for that I think he deserves a production credit alone but only ever says strong arrangements. I can just imagine how shit the strings on 'Oh Oh Yeah' by The Outsyders were before he did them. I've always loved strings though, was obsessed with Larry Gold back when Darkchild was working with him

Really, I thought he got co-producer credit sometimes? Well there's a demo for Falling Out, the difference is obvious. I'm guessing S&K knew there'd be real strings added, it sounds super basic and kinda like a placeholder, their fake strings usually don't sound THAT cheap.

Yeah wish we got more Larry Gold with random producers, I'm guessing he doesn't work too much anymore though :/

Ahh look at this yay 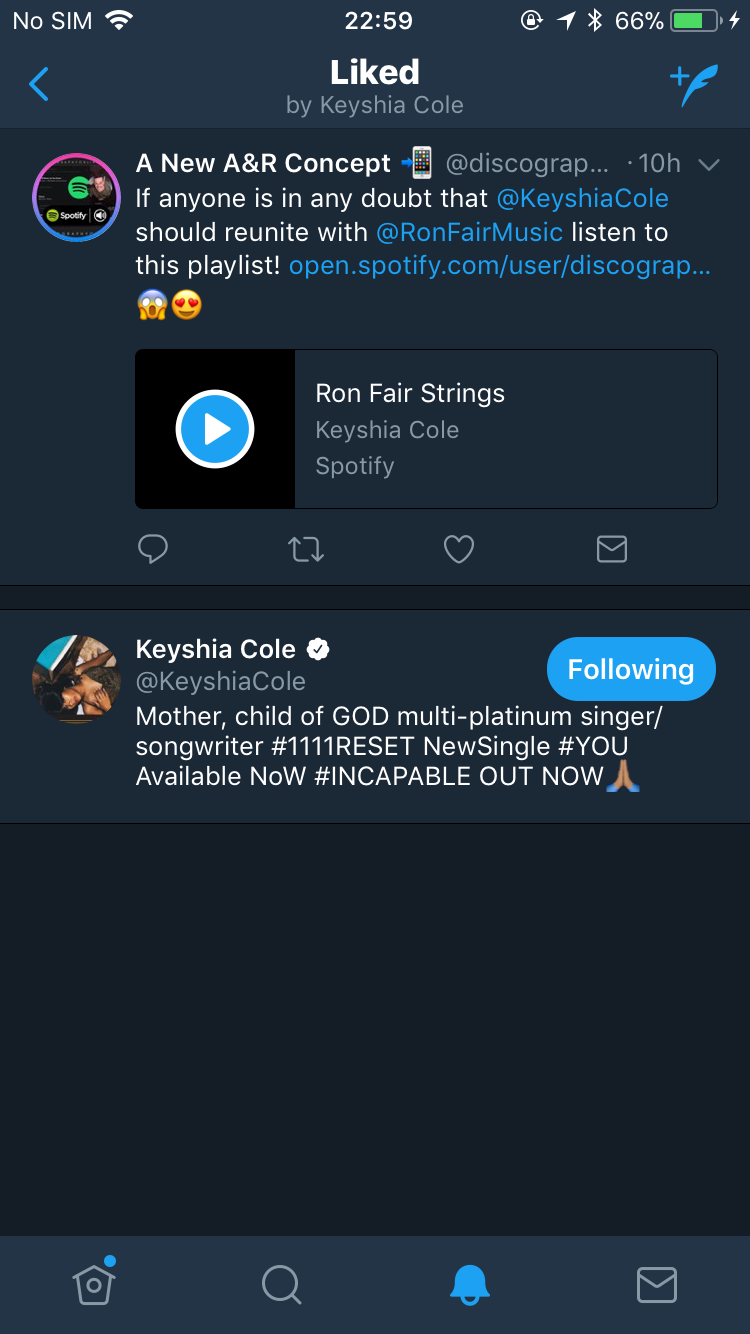 Larry Gold? He's done a ton of stuff over the years, being from Philly he worked on a lot of The Roots related stuff too. I assume Scott Storch brought him into the picture with Tim. Those strings he did on The Boy Is Mine though LMAO easiest paycheck ever...

I will have to see what he worked on with Scott, I remember loving his strings on the Jaguar Wright album though. Need to listen to his Tim tracks too..

I'm not sure if he actually did a lot with Scott Storch w/o Tim, I can think of The Roots - You Got Me & Jazzyfatnastees - Compelled & Four Lives [Larry's on a bunch of other tracks on that album too though]. But I'm pretty Tim only started working with Larry Gold after he came on board. But Larry has a track or 2 on most of The Roots' late 90s & oos albums, he did all of Game Theory and he is on most of the Soulquarians albums that came out around the turn of the century. He also often does strings on tracks by ?uestlove & James Poyser like the album they did with Al Green, the Jay-Z Unplugged album with The Roots and just random collabos as well as a a lot with Philly Neo Soul artists like Jill Scott, Musiq & Kindred The Family Soul etc.

He was on a bunch of DarkChild tracks throughout the years but it was working with Tim that really put him on the map, after that came Kanye, Kid Cudi, Lana, Emile Haynie. Think he only worked with Tim on the Michael Jackson album in the past 10 years or so. Justin used him on a bunch The Ys tracks but the strings on 20/20 were done by someone else.

I'll have to do a discography, I've got all the Roots albums and ajacent, I used to be a massive hip hop head when I was a teenager.

I miss Darkchild's strings, if he can't think of anything else to do [clearly he cant] he should bring them back.